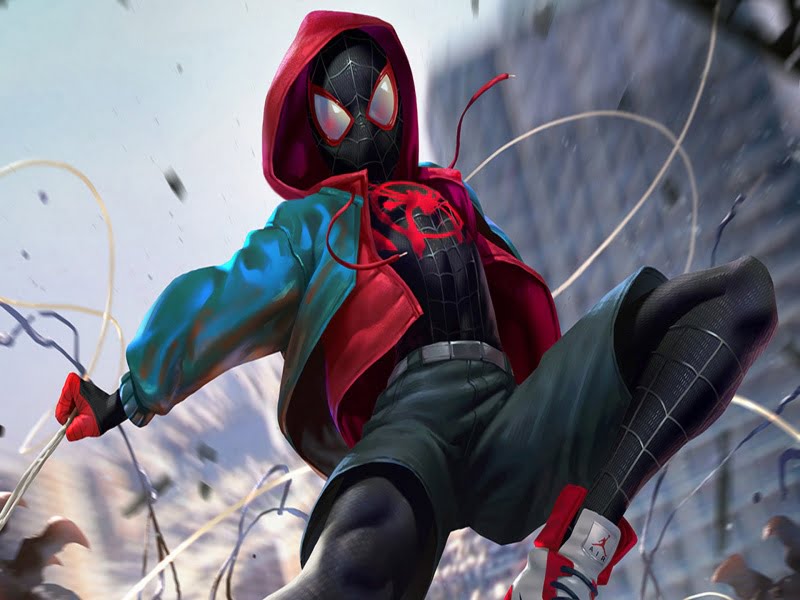 Miles Gonzalo Morales is a fictional superhero appearing in publications by the publisher Marvel Comics, and is one of the characters known as Spider-Man. The character was created in 2011 by writer Brian Michael Bendis and Italian artist Sara Pichelli, with input by Marvel’s then-editor-in-chief Axel Alonso.

Miles possesses similar spider-based abilities as Peter Parker; he has the proportionate strength, speed, stamina, durability, and reflexes of a spider. He can lift up to ten tons, leap several stories, move much faster than the average human, and is generally more resistant to injury or fatigue than normal people.

He is also able to stick to walls by his fingertips and feet, enabling him to crawl along surfaces and buildings. Thanks to his spider-sense, he can perceive dangers around him before he can see or hear them.

However, unlike Peter Parker, he also has bio-electrokenisis powers, including the ability to stun enemies with a “venom blast” and camouflage into his surroundings. Miles wears a costume given to him by S.H.I.E.L.D., and initially uses Peter Parker’s web shooters, which are given to him by May Parker. He is eventually given a new set of webshooters by S.H.I.E.L.D. as well.

Miles Morales first appeared in Ultimate Fallout #4 (August 2011), following the death of Peter Parker. When Marvel’s editorial staff decided that the Ultimate universe’s Peter Parker would be killed in the 2011 storyline “Death of Spider-Man”, the character Miles Morales was created.

Although Morales is the first black Spider-Man, he marks the second time a Latino character has taken the Spider-Man identity. Miguel O’Hara, who is of half-Mexican descent, was the title character in the 1990s series Spider-Man 2099.

Miles Morales was created by writer Brian Michael Bendis and artist Sara Pichelli. Bendis’s thoughts about the character, and the way he looked in his first appearance, were heavily influenced by African-American actor Donald Glover’s appearance in Spider-Man pajamas in “Anthropology 101”, the second-season premiere of the television comedy series Community.

He was featured in the Ultimate Comics: Spider-Man comic book series, and after Marvel ended the Ultimate imprint in 2015, Miles was made a character in the main Marvel Universe, beginning with stories under the All-New, All-Different Marvel branding that debuted that same year.

The character was not the lead character in the Ultimate Spider-Man animated TV series on Disney XD but he was later added to the main cast, and the main protagonist in the 2018 feature film Spider-Man: Into the Spider-Verse which won the Academy Award for Best Animated Feature.

In Miles’ original reality, Norman Osborn, AKA the Green Goblin, sought to recreate the circumstances that created his arch nemesis Spider-Man (Peter Parker). In his efforts at Oscorp, a genetically enhanced spider known as specimen 42 was unknowingly stolen by Aaron Davis, a high-tech thief known as the Prowler. Davis had a relationship with his teenage nephew Miles Morales, one Miles’ parents Jefferson Davis and Rio Morales neither approved nor were aware of.

One day, while visiting his uncle to tell him about winning a lottery to enroll at the prestigious Brooklyn Visions Academy, Miles was bitten by the burglarized spider. Upon discovering that the bite left him with super human abilities, Miles had a brief early brush with super heroics when saving people from a burning building. After talking things over with his close confidante Ganke Lee, however, Miles decided that this life wasn’t for him.

Later, Miles snuck out of school to watch the Green Goblin and Spider-Man have their climactic battle, which saw both of them perish at the other’s hand. Blaming himself for not using his powers to help Peter, Miles attended his funeral, where Gwen Stacy relayed Uncle Ben’s lesson that with great power comes great responsibility.

Initially, he was inspired to fight crime in a makeshift Halloween costume version of the Spider-Man outfit, but after proving himself to S.H.I.E.L.D. Agent Spider-Woman (Jessica Drew), the agency gifted him a new uniform, thus beginning his official career as the new Spider-Man.

Reaction to the character varied, with some, including Spider-Man’s co-creator, Stan Lee, approving the creation of a positive role model for children of colour.

Others expressed displeasure at the replacement of Peter Parker, with The Guardian, Fox News, and Culture Map Houston reporting that some fans viewed the decision as an attempt by Marvel Comics to exhibit political correctness, and that the introduction of a minority Spider-Man was simply a publicity stunt to attract more readers, a charge Alonso denied.

Alexandra Petri of The Washington Post called for the character to be judged on the quality of his stories, which garnered positive reviews.

James Hunt of CBR.com rated the issue #1 four and a half out of five stars, lauding Bendis for emphasizing Morales’ character and his supporting cast instead of rushing him into costume. The first issue holds a score of 8.0 out of 10 at the review aggregator website Comic Book Roundup, based on 13 reviews, while the final issue, #200, holds a score of 8.4, based on 14 reviews, and the series overall holds an average issue rating of 8.3.