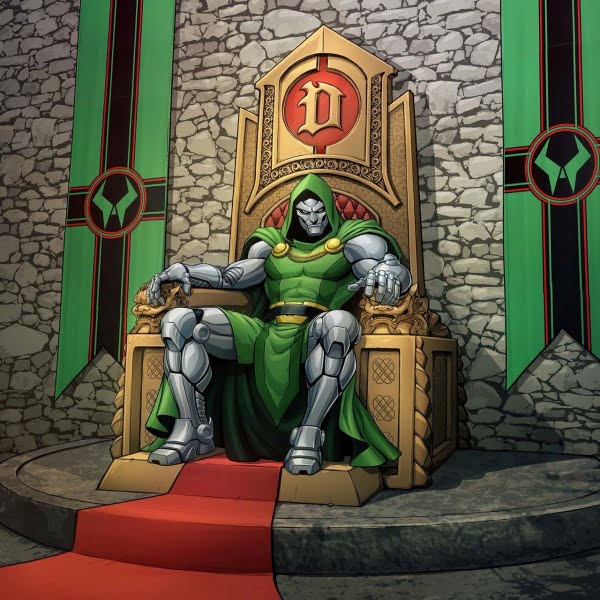 Dr. Victor von Doom, Ph.D aka Doctor Doom is a Latverian politician who serves as the Monarch and Supreme Leader for the Kingdom of Latveria. He was scarred from an accident and wears an iron mask and armor to hide his true face. This supervillain is considered one of the most brilliant minds and scientists on the planet Earth.

His journey from godhood, villainy and sometimes anti-hero behavior has not only garnered him power but massive amounts of wealth as well.

Lex Luthor was originally a mad scientist, but since the late 1980s, he has more often been portrayed as a power-mad business magnate, the CEO of LexCorp. He wishes to rid the world of Superman, ostensibly because Superman is a threat to humanity, but really because he envies Superman’s popularity and influence.

Given his high profile as a supervillain, however, he has often come into conflict with Batman and other superheroes in the DC Universe. Lex Luthor is an ordinary human and has no natural superpowers but occasionally wears his Warsuit, a suit of mechanized armor that gives him enhanced strength, flight, advanced weaponry, and other capabilities.

One of the most feared, dangerous and powerful crime lords in the Marvel Universe, usually depicted as New York City’s crime overlord, he was introduced as an adversary of Spider-Man, but later went on to menace other Marvel heroes, becoming the archenemy of Daredevil, as well as a recurring foe of the Punisher.

Known to control the criminal underworld, this supervillain has also in recent years become the Mayor of New York City.

Born with a silver spoon in his mouth, Norman inherited his wealth from his father. He did however, build Oscorp into a giant. He cheated in order to gain much of his wealth, framing his competitor (Mendell Stromm) for embezzlement before he could complete his super-soldier formula.

Despite his passing, Norman rose to power once again after his passing and since has become a major villain in the Marvel Universe as a whole, even taking on a government position and becoming the Iron Patriot, leader of the Dark Avengers.

Norman’s main villainous role, of course, is as the Green Goblin, the longtime foe of Spider-Man.

Born into wealth, thanks to his father Norman Osborn’s company, Harry was once Peter Parker’s best friend and ally. However after his father accidentally ended his own life while battling Spider-Man as the Green Goblin, Harry took a dark turn.

With his father’s loss sending him down a dark path, Harry not only became the Green Goblin himself, blaming Spider-Man for his father’s passing, but he inherited his father’s company as well.

Max Eisenhardt, aka “Magneto”, the “Master of Magnetism” is a powerful mutant with the ability to generate and control magnetic fields. This supervillain regards mutants as evolutionary superior to humans and rejects the possibility of peaceful human-mutant coexistence; he aims to conquer the world to enable mutants, whom he refers to as Homo superior, to replace humans as the dominant species.

He gains his wealth after finding a cache of hidden Nazi gold in Israel. With this money he went forth to prove to the world that mutants were truly superior to humans.