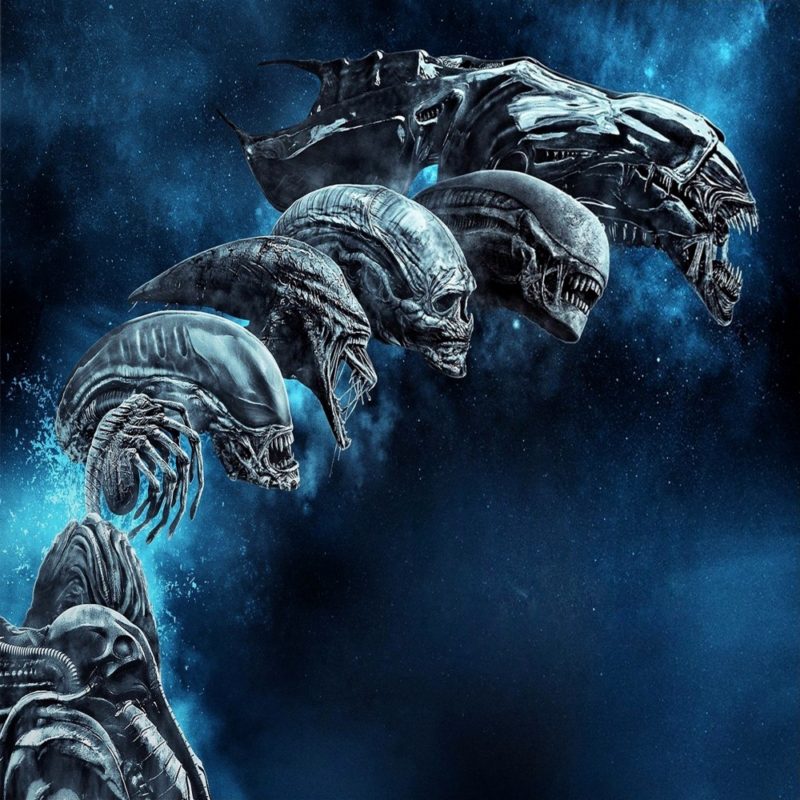 The Alien (also known as Xenomorph) is a fictional endoparasitoid extraterrestrial species that is the eponymous antagonist of the Alien film series. The species made its debut in the film Alien (1979) and reappeared in the sequels Aliens (1986), Alien 3 (1992), and Alien Resurrection (1997).

Similar creatures of slightly different designs such as the “Deacon” make a brief appearance in the Ridley Scott film Prometheus (2012) along with the “Neomorph” and a variation of the Xenomorph which appear in the sequel Alien: Covenant (2017).

In addition, the Alien appears in various literature and video game spin-offs from the franchises.

The Alien design is credited to Swiss surrealist and artist H. R. Giger, originating in a lithograph titled Necronom IV and refined for the series’s first film, Alien. The practical effects for the Alien’s head were designed and constructed by Italian special effects designer Carlo Rambaldi.

Furthermore, the species’s design and life cycle have been extensively augmented, sometimes inconsistently, throughout each film.

Unlike many other extraterrestrial races in science fiction (such as the Daleks and Cybermen in Doctor Who, and the Klingons and Borg in Star Trek), the Aliens are not sapient tool-makers: They lack a technological civilization of any kind, and are primal predatory creatures with no higher goals than the propagation and self-preservation of their species, including the elimination of other lifeforms that may pose a threat to their existence.

Similarly like wasps or termites, Aliens are eusocial, with a single fertile queen breeding a caste of warriors, workers, or other specialists strains. The Aliens’ biological life cycle involves traumatic implantation of endoparasitoid larvae inside living hosts; these “chestburster” larvae erupt from the host’s body after a short incubation period, rapidly mature from juvenile into adulthood within hours, and seek out more hosts for implantation.

Finally, for Fanboys and Fangirls who want to know all they can about this terrifying monster. We’ve put together a list of 15 facts fans probably don’t know about The Alien (Xenomorph).